You are here: Home | Ponies 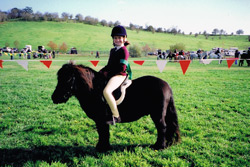 Ryan is a Shetland pony. He came to live on the Meadow when Mary was four years old. He has taught many little children how to ride. He is the most gentle and trustworthy little pony. He is always very polite. He loves it when children come to visit him, especially when they give him treats of sugar and carrots! In summertime his coat is shiny and black, but in wintertime his coat is long and shaggy like a brown bear. Even though Ryan is the smallest horse on the Meadow he is the leader of all the Meadow horses. He teaches young horses and little children how to behave in a kind and respectful way. Mary is now grown up but she still loves to come home from the city and visit Ryan O’Brien. 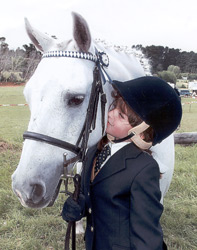 When Mary grew too tall to ride Ryan O’ Brien, Mousey came to stay on the Meadow so that Mary would have a big pony to ride. Mousey became best friends with Ryan O’Brien and helped Mary gain confidence in her riding. Mousey taught Mary how to gallop across the fields and how to ride around the show ring. Best of all, Mary loved taking Mousey in the fancy dress parade. It was a sad day when Mousey had to leave the Meadow. Both Mary and Ryan O’Brien were very upset, but Mousey had another important job to do. He had to go and teach a little boy called Patrick how to ride. Patrick lived with his family far away in the Snowy Mountains so we made sure Mousey had warm coats to wear when he left. 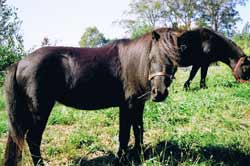 Clarissa is a sweet Miniature pony who belongs to a good friend, Janice. Janice brought Clarissa to live on the Meadow because Mary told her how Ryan O’Brien was lonely and needed a new best friend.  Clarissa loves Ryan O’ Brien very much and wants to be with him all the time. When Ryan leaves the paddock to give children pony rides, Clarissa gets upset and calls out to him in a loud whinny. She seems to be saying, “When are you coming back, Ryan O’Brien? Please come back soon!” 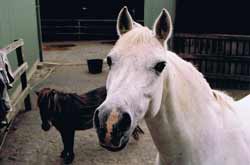 Pippy is a beautiful Australian Pony who came to live on the Meadow when she was three years old. She is a clever and kind pony, who has won many ribbons at riding competitions with both Mary and Mary’s big sister Joey. When the two girls grew up and went out into the world, Pippy retired from riding and has now had two foals. Her first foal, Dally, a beautiful dark brown pony, has gone to live down at Bega on the Far South Coast of New South Wales with her new owner Jade. Dally has become a champion dressage pony and Jade is very proud of her. Pippy’s second foal, Ravel, is a friendly, cheeky boy who still lives on The Meadow. He is grey in color like his mother and is already taller than her. Soon he will learn to wear a saddle and bridle and carry a human on his back. One day he may even be in a Ryan O’ Brien story and we will get to know him better. 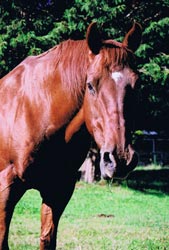 Tuxedo Junction is an American Quarter Horse.  He is indeed the oldest and wisest horse of all and is now thirty-two years old.  He belongs to a dear friend called Margaret who visits him every week and gives him lots of love and little pieces of apple. Sally and her little boy, Jacob, help Margaret look after Tuxedo.  Tuxedo is famous because there is a picture of him on the front page of a newspaper in 1996 with the pop star, Johnny Farnham, sitting on his back. Johnny is smiling and Tuxedo Junction is looking very surprised and wondering what all the fuss is about! Tuxedo Junction used to live in a paddock filled with dozens of horses when he was young, so now he likes the peace and quiet of living on his own. He always likes it when humans visit him with carrots and ponies come with questions. He is a very serious horse and always looks as though he is thinking about things very carefully. 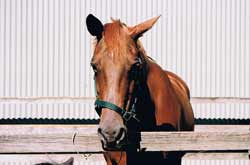 Breezy McCue is a bossy chestnut mare, who wants to eat all the time. She took Mary to many dressage competitions when Mary was a teenager. She is always very kind to humans but can be cross with little ponies and frightens them sometimes. Kipper, Snoopy and Maximo – the three happy dogs- are scared of her and the humans are always telling them, “Steer clear of Breezy!” She lives  with Old Painter on the Big Field.  Painter just laughs at her when she tries to boss him around and is very kind to her. The two of them do everything together. They were both born in1986 and are like an old married couple. They are even starting to look like one another! Breezy really does have very big ears but the humans don’t like to say that too loudly in case Breezy is offended. 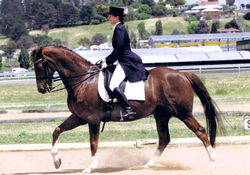 Old Painter was once a champion dressage horse. He used to look marvelous going around the competition arena with his four white socks and his rider in top hat, tails and shiny black boots! He came from the city to live on The Meadow when he was fifteen years old. Even though he is the tallest horse on The Meadow he is easily frightened by loud noises and worries about things too much. Ryan O’Brien was the one who taught him how to be calm and brave when he needed to be.  He used to enjoy dancing in front of cheering crowds but now he prefers relaxing on the Meadow with his best friend Breezy McCue. He enjoys the simple things in life like a drink of lovely cool water from the water trough. Old Painter’s competition name was Kooleena Grand Jury but this is just a little too serious for The Meadow. 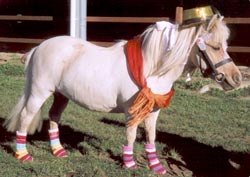 Jodie Lee is a cheeky palomino miniature pony, who makes audiences double up with laughter. She is a real clown. She is also very clever and gets her own way too often. Janice, her owner, loves to dress her up and teach her tricks. Jodie Lee is afraid of nothing at all and can be very naughty sometimes. She loves to break into the feed-room and nibble open sacks of oats. Sometimes she sneaks under fences and chases the big horses around the paddock. It is hard to get upset with her because she always seems to have such a big smile on her face! 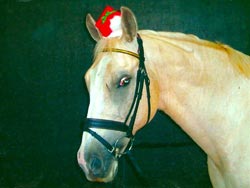 Kalinski is a handsome palomino horse. His full name is Tavistock Kalinski. His nicknames are “Stinky Kalinski” and “Kal”. When he first came to the Meadow he upset all the horses and ponies by putting on rude and cranky faces. Ryan O’Brien was the only one game enough to try and talk to him. When everyone finally understood that Kal was really kind and gentle underneath, he started to make good friends. Legend became his best friend.  Kalinski is a talented dressage horse and he continues to compete at State and National Championships with his owner Sally. 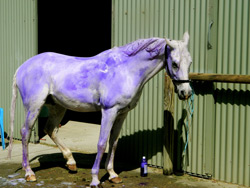 Legend is an Arabian show horse who came from Geraldton, a town on the West Australian coast.  He travelled in a truck for four days to reach The Meadow, which is near the East Coast of Australia. He is pure white and is as beautiful as a statue. Legend is always happy and doesn’t get upset by anyone or anything. He likes all horses and didn’t seem to even notice when Kalinski was mean to him. There is just one unusual thing about Legend. He just hates getting dirty so he never ever rolls on the ground. You won’t be surprised to hear that the one thing he really loves is having a bath. He is shampooed with a special purple shampoo that makes his coat dazzling white. 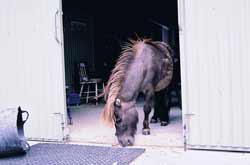 Mimi la Boom was a very sad pony indeed when she first arrived.  A friend found her sick and starving and brought her to the Meadow so she could recover and have a better life. Pippy, the grey pony, helped her back on her feet. Pippy taught her that there are good horses and good humans in the world and it is possible to learn to trust them again. Mimi la Boom is always listening out for the humans and gallops in like the wind when she knows it is time for dinner! Sometimes she eats too quickly and gives herself a tummy ache! Mimi la Boom is now a good friend to Ryan O’Brien, Clarissa and Monty Malone. She also loves to play with Ravel, Pippy’s foal. Even though Ravel is much bigger than her, she tries to boss him around. 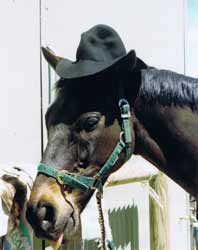 Charlie the Racehorse visited the Meadow for just two weeks one summer. This was at the time Ryan O’ Brien was looking for a new best friend. Charlie needed a holiday from racing and his owners thought he might enjoy resting on the Meadow. He was used to living in a stable and having a busy life at the racetrack. He tried to enjoy being in the country but found it much too quiet. He had forgotten how to eat grass and would only eat oats from a bucket. He didn’t like the wind and the rain and was frightened by the brown cows, which grazed in the back paddock. He didn’t try and make friends with any of the Meadow horses and was very happy when a horse float came and took him back to the City. Ryan O’Brien tried to talk to him once or twice but Charlie just ignored him. 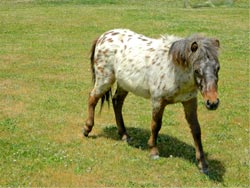 Monty Malone is a leopard spotted miniature horse who came to live on the Meadow when he was only one year old. He grew up in the Hunter Valley in New South Wales in a herd of miniature horses, many of whom had spots. When he first came to the Meadow the Meadow ponies and Meadow dogs were surprised and even a little afraid of his appearance. It took them a while to make friends with him. Monty Malone is now one of the most popular ponies on the Meadow because he is so brave and fun-loving. Maximo, the puppy with the very fine tail, still doesn’t like Monty Malone, but hopefully in time they will get on better. 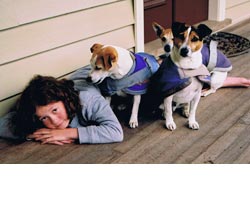 Kipper, Snoopy and Maximo are three happy dogs who have been living on the Meadow from the very beginning. They have watched horses and ponies come and go and they try hard not to be jealous of them. The dogs want the humans to love them best. They jump into laps to be patted and tickled and then they grin as though to say, “See, the humans love us best!” They don’t quite understand why horses are ridden round and round in circles in the arena but they don’t get bored watching because they have a lovely sunny bench to lie on. In winter they have hot water bottles to keep warm and in summer they amuse themselves by catching flies. Kipper, Snoopy and Maximo are happiest when Edie, Mary’s little cousin, visits from the city because they know she is a Dog Person and not a Horse Person.  A Dog Person is a human who definitely loves dogs more than horses. When Edie is on the Meadow the dogs have all her attention and they get up to lots of adventures.